What is the best year for music ever? 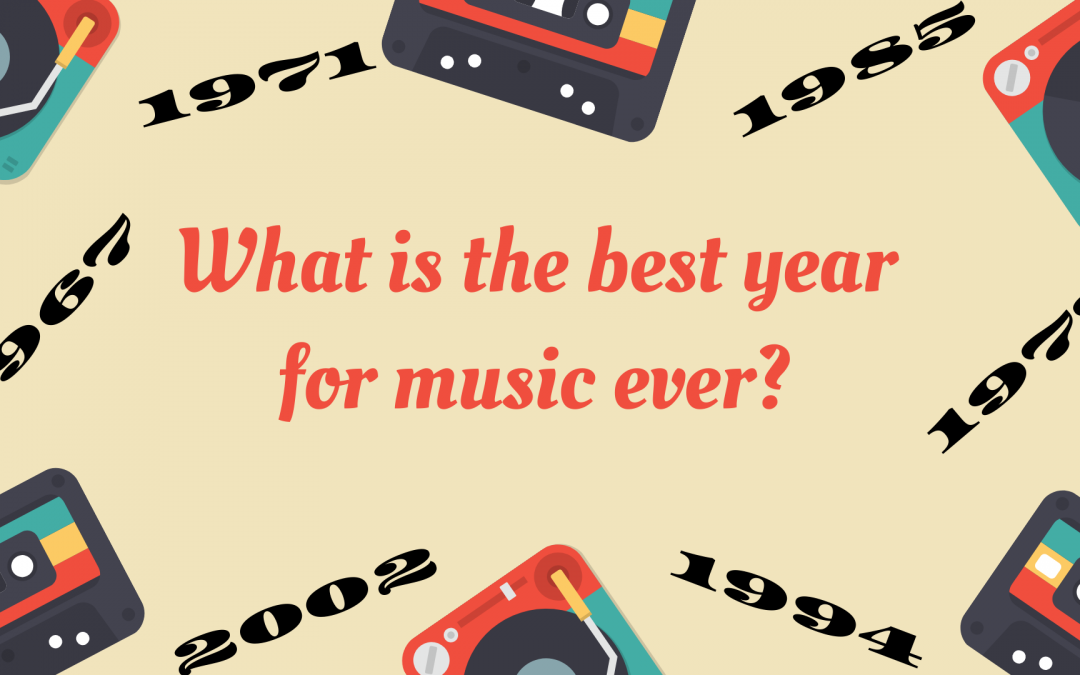 There’s always a lot of discussion or perhaps arguments down at the record fairs or the pub as to what the best decade was for music. Usually you can work out what people will say by the wrinkles on their face and the greyness of their hair. It’s not too hard to decide, you usually know which decade you would go for. The Swinging sixties, the northern soul all nighters of the 1970’s. The late 1970’s punk, or 1980’s pop. What about the Britpop of the 1990’s? Then there was the Heavy Metal of the 1980’s. Valid arguments for each no doubt.

How do you decide the best year of music?

There are a few things that might push you towards your year of choice. It might not even be the quality of the music. Psychologists suggests that the music we listen to in our teenage years stays with us a lot longer than at any other time during our life. Check out the interview here with Dr Catherine Loveday on BBC Radio 3 who explains this far better than I can.

In more practical terms though those teenage and perhaps the early twenties years there was, for most of us a lot more time to sit down and listen to music. How many of you were sat in your bedroom listening to the same album? Or even just a song over and over again. Perhaps you were off at University or in your first flat share and often music was a big part of this. Whether it was listening at home with your first girlfriend getting stoned or getting ready to head out to the club or the nearest gig.

This time was very influential musically and that was whether you grew up in the 1960’s, 1990’s or even today i’m sure. Then the big change came maybe it was 22 or 25, but the career became a bit more serious there were bills to pay and perhaps the starting of the new family with new mouths to feed. Did you listen to the same amount of music then? Did it have such an impact on your life probably not.

Are there really years of music that are better than others?

According to recent new download data released by the music industry body BPI there are years that are more popular than others. This article by Mark Savage at the BBC  is a great piece about what makes the Best year of music. Analysis of what was streamed last year shows us that the “best” or at least the most popular years of music from each decade were 1969, 1977, 1984 and 1999.  Check outs Mark’s article to see the top ten streamed songs from these years.

The best year of Music – My Personal Choice

Ok my best year music was 1994. It was a tough choice between 1994 and 1995, but 1994 won out. Those late teenage years for me (I’m 43) were all about the Britpop era, nothing beats Oasis, Blur etc. 1994 was the year of Definitely Maybe and Parklife, but perhaps it was Green days Dookie that led me to my choice. But back to the age thing. I was 17 years old I had a lot of time to listen to music. It was all about hanging out with mates and trying to either get into the local nightclub or get served at the local pub….glorious times, fantastic music.

Please do add your comments below for your best year of music. Oh and if you decide to hang on to your Lp’s for that year, but can’t face listening to the rest get in touch. I‘m always looking to buy in new collections of vinyl records.

Need helps to decide what you best year is here are some great resources:

Check out the best Albums of each year or decade here.