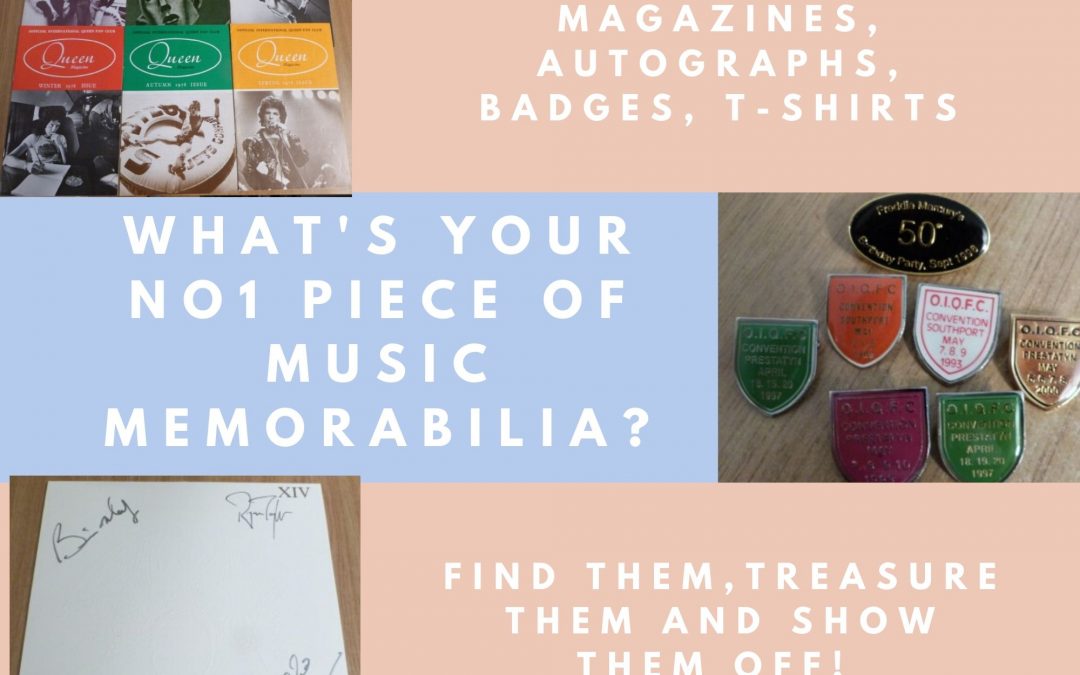 At sellvinylrecords it’s not all about the vinyl, I am always looking for people who are looking to  sell their Music Memorabilia. This post takes a look at the different types of memorabilia that I have come across. I would love to see comments about what you have got in your collection.

If you do have Music Memorabilia to sell or just want some advice on potential worth please do get in touch here.

A few things to point out before we start. It is quite difficult to put a value on Music Memorabilia. There aren’t any specific guides or websites to just look up the value of your item. A lot of music memorabilia is rare by the fact that there aren’t many around. Sometimes what you have is unique and may never have been sold before.

A general rule I use is to look at the collectability of the band/artist that you have. The bigger the worldwide audience of collectors I would say generally the more demand and potentially the higher price you may get. The top five or six bands to look out for are Beatles, Rolling Stones, Led Zeppelin, Pink Floyd, David Bowie, Sex Pistols, Clash, Iron Maiden, Metallica. The list could go on and it’s also not to say that memorabilia from smaller bands is not collectable. It’s just that those bands mentioned above will have thousands of worldwide collectors looking to buy.

The other point to raise with memorabilia is like records, condition is very important. But more importantly is authenticity. There are many fake items, autographs and reproductions on the market. Trying to work out if you have something original can be very difficult.

Lets take a look at a few examples of Memorabilia that you may have in your collection. Most pictures here are taken from my recent Queen collection that I was lucky enough to purchase.

Possibly not worth a fortune, but certainly very sought after by some collectors. I recently picked up a small collection of Zig Zag magazines from 1969. Also in the mentioned Queen Collection i had a lot of Queen fanclub fanzines spanning approx 20 years. (see picture

I have found a great demand in 1960’s and early 1970’s magazines and newspapers like NME and Record Mirror. The ones that always sold the best were those with great front page pictures of the iconic bands. There are also quite a few perhaps more underground magazines these may be particularly sought after in niche music genres like punk.

I have also recently purchased collections of artist specific magazines or fanzines sometimes issued by an artists Fanclub. Check out the picture below of the Queen Fanclub fanzines I found recently. 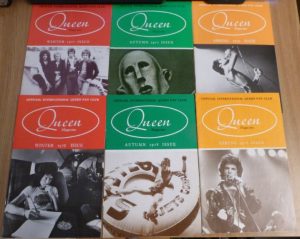 Now these can be rare. Especially the posters. Often posters for say concerts were produced in runs of 500/1000. Then they were pinned/glued up everywhere so how many are left in existence? Add to that the unique artwork that can be found on them and you have a real scarcity factor. I once bought some posters from a concert promoter nothing amazingly rare, but he told me a story about a Jimi Hendrix Poster he…. well he nicked in the late 1960’s. He lived in Windsor and was out on his bike when the saw a man get out of his van and glue up the said poster. Once the man had gone and before the glue had dried he took it down and kept it, He sold that poster for well over £3,000 a few years ago!

Autographs are fantastic additions to any collection. They look great on a favourite album cover and framed. If you are buying autographs though it can be a minefield. In my experience the best and most authentic autographs come with a real sounding back story that involves the seller having got the autograph in person. According to research over 80% of autographs sold on ebay maybe fake. Worse still most fakes will come with a certificate of authentication. The certificates are quite often just produced by the sellers and not worth the paper they are written on. In fact if I am buying an autographed record in a collection a certificate of authentication is a warning that it may be fake.

If you have bought an autograph I have actually found the best way to authenticate it is to ask an expert. I have used devoted facebook groups to a particular band and put up photos to ask if they are the real deal. There maybe differing opinions, but usually these groups will have an expert in residence that can offer their opinion. The way I authenticate my autographs is to take very good pictures of them put them on an ebay auction at a very low start price and let the market decide what they are worth. A low price will suggest they are fakes a higher price will suggest you have the real thing. But you are risking that they may sell at a low price by doing this.

See my Queen autographed LP which came with the Complete works box set. I guess no guarantee they are genuine, but I do know that 500 of these boxes were signed on this exact record and in these positions so i’m 99% sure they are the real thing. 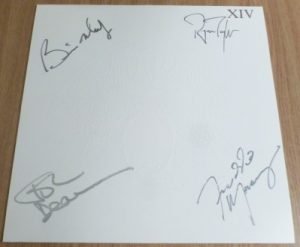 Take a look at the photos below. The Queen collection i picked up had items such as calendars, Christmas cards, pin badges, banners and teeshirts. Even a pair of Queen earrings! The list can be endless, some possibly worth something some probably worthless, but if your collecting does the value really matter?

Then there is the serious end of memorabilia. Items such as clothing worn by stars, guitars used by famous musicians even locks of hair or John Lennons Tooth that sold for £19,000! 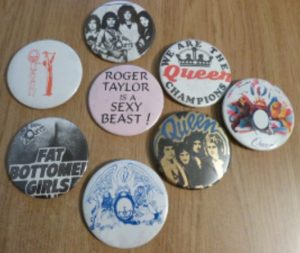 Here’s my take, memorabilia is a great extension of collecting vinyl records the list of what you can find is literally endless. Is it a good investment sometimes perhaps, but usually the joy of this stuff is hunting it down getting it in the collection and telling people about it.

If you are looking to sell your music memorabilia or just looking for some advice. Please do get in touch with me.